The Almighty Tallest is the leader (or leaders) of the Irken Empire. As the name suggests, he or she is the tallest known Irken alive and has virtually absolute power, besides the Control Brains. The current Tallest are Almighty Tallest Red and Almighty Tallest Purple. They appear in Powerpuff Girls Doujinshi and were meant to appear in Invader Zim: Manifest Doom before it got cancelled.

The Irken Empire has a hierarchical class structure in which shorter individuals are both figuratively and literally looked down upon. The tallest Irken born in a specific generation takes command of the entirety of the Empire. However, in the event that two Irkens are exactly the same height, they will rule simultaneously, such as in the case of Red and Purple. In such a case, which is likely rare, the two may or may not take responsibility for different aspects of the Empire, something that may be alluded to by the general attitudes of Red and Purple. What with Red being more outspoken, active, and generally 'in-charge', and Purple generally paying more attention to eloquence, social situations and creature comforts such as food and drink.There is no known official enthronement ceremony for the Almighty Tallest, however, and the only confirmed ceremony is that in which the thumbs of the recently ascended Tallest are amputated (which it has been implied that the current Tallest have forgone by simply hiding their thumbs inside their massive gauntlets).

The Irken race as a whole almost religiously refers to their leaders as "My Tallest", highly akin to the way humans participating in a monarchal societal structure refer to their rulers only as "Your Majesty". As a general rule of both grammar and respect, "My Tallest" is never pluralized, even when two Tallest rule in tandem.

Presently, the two current Almighty Tallest, Red and Purple, travel around to observe and supervise Operation Impending Doom II in The Massive, the largest and most powerful ship in the Irken Armada. It also serves as Red and Purple's personal vessel. While they appear to have a casual interest in expanding the Empire, as well as take great amusement from watching the process of such, Red and Purple are rather lazy and prefer to spend most of their time lounging around and eating junk food. Previous Tallest, such as Almighty Tallest Miyuki, seem to have been more productive.

Presumably, one might assume that this is due to complacency on account of the Empire's incredible size as well as lack of need for worry.

As in a judge/jury system, though, the Tallest can occasionally overrule a Control Brain's decision (e.g. when they alter Larb's assignment from Blorch to Vort). Although they are seen to have the ability to do anything that they please, it is likely that they really just don't want to do anything else, content with their already-leisurely condition of life.

Although they are same species as their subjects, the Almighty Tallest differ from their subordinates in many ways other than height: they appear to only have two fingers (as opposed to the normal Irken amount of three or four), and their waists are unnaturally thin. Explaining the former, it was stated by the Invader Zim crew that when a Tallest is chosen, their thumbs are usually chopped off in order to prove that they can rule without them. As for the waists, it is possible that the seemingly impossible effect was achieved by an extreme form of corsets, which, while impossible to do with a human torso, is quite possible with that of an Irken, as the only organs in their midsection are their spine and their squeedly spooch, a type of super-organ resembling a human stomach.

Despite their apparent omnipotence within the Empire, the Almighty Tallest are actually little more than figureheads which give the Irken populace something familiar to idolize in their society; the Control Brains have all of the true power and influence over the citizens, and even the "Almighty" Tallest must submit to their decisions. However this may not have always been the case. With the rare gene that seems to surface only once or twice in a generation, the tradition and history of the Tallest may very well trace its roots far back in Irken history to long before the Control Brains had ever existed, giving the role a very powerful influence in Irken society, and thus serving as a very convincing "face" for the real leaders of the Irken Empire.

On an Irken holiday known as Probing Day, it is the duty of the Almighty Tallest check up on all the Irken Invaders and ask them to conduct a presentation on how they plan to conquer their assigned planet; however, as is to be expected, the generally-frivolous Red and Purple force the Invaders to instead do a puppet show on how they're going to conquer the planet; failure to meet the Tallest's standards is met with punishment by whacking the individual on the head with mechanical mallets - referred to as a "pummeling;" it is unknown how long this part of the tradition has been in place.

Red and Purple may possibly be the first co-rulers to be active for a very long time, being that Miyuki and Spork were going to appear as lone rulers. As leadership is determined by height alone and not competence, it is probable that Red and Purple are simply the same height and as such were both promoted at the same time.

Almighty Tallest: Red and Purple are both the leaders of the Irken race. The Irken Empire has a hierarchal class structure, where shorter individuals are both figuratively and literally looked down upon. The tallest Irken born in a specific generation takes command of the Empire as "the Tallest", but since Red and Purple, the two current Tallest, are exactly the same height, they share equal (and high-supreme) power. They are not related, as it sometimes seems, which is proved in the unaired episode "The Trial." They often show an obsession with snackfood and ridiculing Zim. 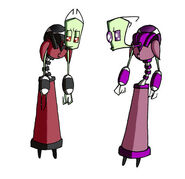 The Almighty Tallest in Invader Zim
Add a photo to this gallery
Retrieved from "https://doujinpedia.fandom.com/wiki/Almighty_Tallest?oldid=6006"
Community content is available under CC-BY-SA unless otherwise noted.