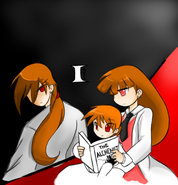 Red's family
Add a photo to this gallery

For the further information of this Character see also: Blossom's storyline.

Blossom is "the smart one" and self-proclaimed leader of the Powerpuff Girls. Her ingredient was "everything nice," her signature color is pink, and she has long redheaded hair with a huge red bow and pink hair clip in the back. She was named for having spoken freely and honestly to the Professor shortly after her creation. She is often seen as the most mature, level-headed and composed member of the group, though she can be fussy, forgetful, overbearing, vain and overly analytical at times.

Blossom, being of Powerpuff Girl, can use many different powers and abilities. This includes, but not limited to:

Retrieved from "https://doujinpedia.fandom.com/wiki/Blossom?oldid=6749"
Community content is available under CC-BY-SA unless otherwise noted.