Boomer is one of the Deuteragonist of Powerpuff Girls Doujinshi. He is the male Counterpart of Bubbles.

Boomer had only made one appearance yet. He was battling along with Butch and Brick against Jenny. It was supossed to be a simulation but turned into a slaughter when Butch cut off the arm of Jenny. After that Nora Wakeman came to help Jenny and complained to Dr. Brisbaine about it. Dr. Brisbaine said that the boys just are too strong. Dr. Brisbaine told to Boomer that he was in the "clouds" again, and said to Weasel give the report the next morning on his desk. Brick said to Boomer that he had to keep his head with the mission and don't think to much about those girls. However Boomer seems he has Crush on Bubbles as he remembers that day he was Kissed.

Boomer isn't exactly the brightest boy around. He's only a little bit Smarter than Billy.

Although Boomer, or any of the Rowdyruff boys, hasn't displayed any of his powers he possible has remained the same powers that he had from the original show. It's been shown that Boomer's not the brightest boy around. He's only marginally smarter than Billy.

He is an antagonist from the Cartoon Network series The Powepuff Girls. He and his brothers were the male counterparts of the girls, so anything that the girls stood for, the boys would be against it, often doing the opposite of what the girls do. His signature color is colbat blue and his ingredient is snips. They do graffiti, terrorize people on the streets, make mess and that kind of things. They would often clash with the girls on every encounter and usually the battles would be long and fierce with the boys taking the upperhand later. However, the girls figured out how to beat them: Kissing. Blossom, Bubbles, and Buttercup each layed one on their perspective counterparts which in the end made the boys explode. Later on, HIM resurrected them and made them even stronger than before. However they were soon defeated. In fan media he is Bubble's love interest. 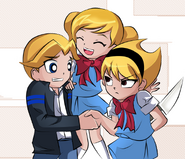 How he meet Mandy eh?

Guess you miss us right? like my suit eh.
Add a photo to this gallery
Retrieved from "https://doujinpedia.fandom.com/wiki/Boomer?oldid=6441"
Community content is available under CC-BY-SA unless otherwise noted.