Bunny is a Minor supporting character in Powerpuff Girls Doujinshi . But a possible new Character will be coming in the comic.

I never knew being alone would make me cry

-Fan quote by !LilMichelleChii (on DeviantArt) for Bunny.

Bunny was first mentioned by blossom to Dexter she was unstable and died, but she was featured later in character art, but now like the other girls, so that may say she will possibly return in a future chapter.

After the fight with Mandark, Blossom and Dexter were upstairs in the room of the Powerpuff Girls. Blossom was sorry for Dexter when Dee Dee died and Dexter was telling Blossom how she didn't know how it felt when you have sister who died. Blossom told Dexter that she knew hold it felt to have a sister who died this is how Blossom mentioned that she had a sister 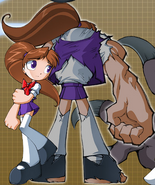 PPGD Appearances. (in Character chart)
Add a photo to this gallery
Retrieved from "https://doujinpedia.fandom.com/wiki/Bunny?oldid=6700"
Community content is available under CC-BY-SA unless otherwise noted.