Courage is one of the main characters of Powerpuff Girls Doujinshi. He is orginated from the Cartoon Network series Courage the Cowardly Dog.

Courage was first introduced after the fight between Dexter and the Powerpuff Girls when they were called over by sir Jack. Bubbles found Courage and Jack explained how he got him.

Once an old lady came at his door and asked him if he could take care of the badly wounded Courage. Jack took him in and cared for him but the old lady didn't return so he kept him.

Bubbles took Courage along with him as her play buddy (similair to Bell with GIR). Suddenly Bubbles got attacked by the Dread Dragon and Courage warned the rest. After that he wasn't seen for awhile.

Later he appeared when Buttercup came into trouble and Jack and the professor decided that Courage must stay with Buttercup to take notes of everything she does. Courage then also spent a lot time with Bubbles after that. Courage appeared also a lot with Buttercup after she learned cooking. He was her partner on the beach and at the science fair. When the Clusters came into the science fair Courage helped evacuating several people including Weasel. He was seen him and Bubbles trying to defend the people from the Cluster bugs, then he help carry Bubbles to the safe room to help out the scientists open the door. Courage was helping Bubbles open the door when he kicked the door and hurt his foot. Courage was later seen with a slambat possibly trying to helping Bubbles keeping the door closed from the Cluster monster. Even they were relieved that the Cluster monster eventually retreated in fear of the bomb's explosion, he and Bubbles became very sad when Blossom and Buttercup had presumely died. Bubbles hugs Courage. She felt very guilty about it, but Courage tells her that it wasn't her fault. Bubbles apologizes to Courage then apologizes again that it has to be this way then said sorry again. Courage said, while stuttering that she gave him a chance to be in a new family and he wanted that. He also said that she doesn't have to be sorry.Bubbles apologizes again with tears running down her cheeks and says to hold tight to her and don't be afraid while stuttering. Courage also seems to be crying. Courage said that he's not afraid. Bubbles then said to not be afraid, don't look, and it will all be fine and it will all be ok. Courage then finally says that he believes her as the light blue light goes to them.

The Grim Tales From Down BelowEdit

He is one of the fallen heroes who died in the Battle of Megaville.

Courage is the protagonist of the show, and an overly frightened dog who lives in Nowhere, Kansas. He was abandoned as a puppy after his parents were sent into outer space, but was adopted by Muriel Bagge. Her husband, Eustace, regularly mistreats him. Ironically, given his name, Courage is a genuine coward, but still goes to great lengths to protect his owners; to the end, he often gets injured, sometimes quite brutally or almost killed and only surviving through his determination and/or pure luck. Aiding him at saving the day is a self-aware, sarcastic, and seemingly omniscient Computer that he keeps in the attic with which he could consult for information in how to remedy any predicament he faces (though it never fails to badmouth him in one way or another). He got his name when Muriel found him as a puppy alone in an alley and remarked that he must be quite brave to be there by himself.

Courage is just like any other dog only he is pink and has black ears. He also has a black nose and black circles on his back, he also wear a yellow collar around his neck.

Courage is most of the times a real cowardly dog. He only has showed his fighting abilities during the evacuation at the science fair. He tried to fight off the Cluster insects, but since his fighting capacity isn't very large, he was quickly overpowered by them, only to be saved by Bubbles. 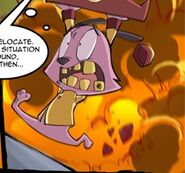 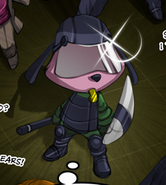 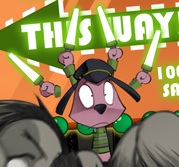 Medic here!
Add a photo to this gallery
Retrieved from "https://doujinpedia.fandom.com/wiki/Courage?oldid=5852"
Community content is available under CC-BY-SA unless otherwise noted.