Dee Dee McPherson is a major supporting character in the story of Powerpuff Girls Doujinshi. She is the deceased sister of Dexter. Although she doesn't appear much in the comic she has much influence on it. She originates from the Cartoon Network show, Dexter's Laboratory.

Dee Dee was the older sister of Dexter. She was always very annoying and kept breaking into his secret laboratory. She also had good moments with Dexter, sometimes taking him to a quiet place to discuss things. Ironically, before her death, during a conversation Dee Dee had with Dexter, she requested that he let her go when she dies.

attacking Dexter's lab. One jackbot aimed for Dexter and Dee Dee jumped in front of it and hit her instead of Dexter. Because if this, she was fatally wounded and died shortly afterward. After that, Dee Dee became a spirit. Dexter was planning to bring Dee Dee back by making an android of her body also by using some of her organs so she would be exactly like Dee Dee.

When Blossom died, Grim was ready to take her with him but Dee Dee asked him to let her stay alive so that Dexter can't lose another close, beloved person. So Grim let Dee Dee revive Blossom and before she did Dee Dee asked Blossom to take care of Dexter until she was back, implying that she may return.

Dee Dee returns during the fight between Blossom and Buttercup against Bell, Samantha and GIR. She is there along with Naga trying to convince Grim to do a favor for them to save one of the girls, or else it would put him out of his job. After convincing Grim to grant them the favor, although he still doesn't like the idea of it, Naga tries to figure out how it will exactly happen. After the fight she picks up the katana and goes over to Blossom and Buttercup and asks them to follow her.

Dee Dee is from the Cartoon Network serie Dexter's Laboratory. She is always irritating her younger brother by breaking inside his lab and make a huge chaos of it. She loves ballet, dolls, ponies, unicorns and generally depicts all the thing young girls care about. In the cartoon she is still alive.

Dee Dee wears a pink ballet dress, she also wears pink ballet slippers with white panty. She has blond hair with pigtails. When Dee Dee died her appearance changed when she became Dexter's guardian angel, she now wears a white dress and has angel wings. She lets her hair out instead of using her pigtails. 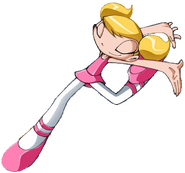 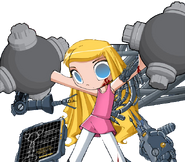 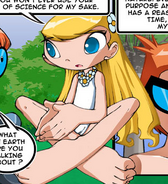 Please for my sake DO NOT REVIVE ME DEXTER!
Add a photo to this gallery
Retrieved from "https://doujinpedia.fandom.com/wiki/Dee_Dee?oldid=6565"
Community content is available under CC-BY-SA unless otherwise noted.