Ferb Fletcher is a minor character in Powerpuff Girls Doujinshi.

Ferb had a cameo apperance when he was escaping from the Clusters along with Phineas and Isabella Garcia-Shapiro.

is Phineas's green-haired, intelligent but laconic stepbrother from England and created by Phineas and Ferb co-founders Dan Povenmire and Jeff "Swampy" Marsh. He first appeared in the show's pilot episode, "Rollercoaster." 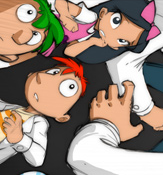 Are we gonna escape yet?!. 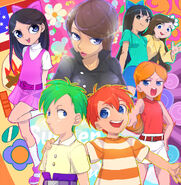 Add a photo to this gallery
Retrieved from "https://doujinpedia.fandom.com/wiki/Ferb_Fletcher?oldid=6491"
Community content is available under CC-BY-SA unless otherwise noted.