Start a Wiki
Flapjack is a minor character in Powerpuff Girls Doujinshi.

Flapjack made one apperance, when he was in Jack's Kendo class Buttercup became wild and KO'd everyone ncluding Flapjack.

He is a boy who was found and raised by Bubbie, a talking whale. He is 8 years old. He is also shown sometimes with big blue eyes. Flapjack is very naive and oblivious to danger, thus he is easily caught up in perilous situations. He holds K'nuckles in extremely high regard, with his affection for the captain sometimes bordering on obsession. His catchphrase is "Adventure!" 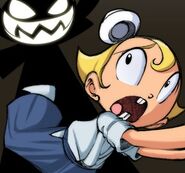 Hi im FLAPJACK!
Add a photo to this gallery
Retrieved from "https://doujinpedia.fandom.com/wiki/Flapjack?oldid=6166"
Community content is available under CC-BY-SA unless otherwise noted.