Jamie is a minor character in Powerpuff Girls Doujinshi.

When Coop went along with Dexter he said that Jamie was having a date with Kiva.

Coop's best friend since childhood, and a smart-aleck slacker. He is the tritagonist of the series, although his contributions are minimal, and are usually limited to comic relief. He frequently makes passes at Kiva and other women, often to little success. He is very cowardly and often runs at the first sign of danger. 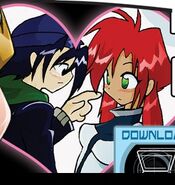 ooh.. How sweet!.
Add a photo to this gallery
Retrieved from "https://doujinpedia.fandom.com/wiki/Jamie?oldid=6157"
Community content is available under CC-BY-SA unless otherwise noted.