Jennifer "Jenny" (aka XJ-9) Wakeman is one of the main characters of Powerpuff Girls Doujinshi. She originated from the Nickelodeon series My Life as a Teenage Robot.

Jenny first appeared somewhere in Nevada fighting the Rowdyruff Boys, but she lost when her arm was shot off by Butch. Butch wanted to finish her off but was stopped by Brick who said the fight was over. Her mother Nora Wakeman came to her side and helped her. She shouted to Dr. Brisbaine that it was supposed to be a simulation not a slaughter. Brisbaine apologized, understimating the power of the Rowdyruff Boys and would make sure to compensate the damages of her daughter. Jenny was brought to Nora's lab and was being repared by both Nora and Sheldon. Sheldon said that it would be just like in the good old time which almost tempted Jenny to self destuct.

She was not seen for a while until the day when the girls returned from the beach. While on school Gaz's batteries ran out of power and she wanted to kill Dib, claiming it was his fault, but Jenny came and gave Gaz new batteries. Gaz immediately started playing. Bubbles saw her and cheered because she was a famous superhero, with Mandy commenting that Bubbles herself was too. Dib then interrupted and said he would like to continue the tour, that was interrupted by his sister. Bubbles looked confused, so Dib said he was giving her a tour while his father was giving Nora a tour, with a grumpy Jenny commenting that she is her mother. Bubbles went to Jenny and said she would love it if their parents would work together, so she could show Jenny around. Dib then asked if Professor Utonium was her father and he explained that the three of them indeed work together. Bubbles was over-excited and thought of XJ-9 as a big sister. Jenny said Bubbles could call her Jenny and that she would be like Bubbles if she was a kid. Jenny and Bubbles took a photo together and she would put it on Facebook during Bubbles' next class. Bubbles commented that she immediately will accept when she gets home.

Jenny and her mother visit Professor Utonium. Utonium asked Bubbles what Ms. Honeydew meant in her last message and Bubbles commented she had a dance. Jenny then said that almost the whole city is coming, only to see her mother. Utonium and Wakeman talked about the new experiment and Nora said it was one of her greatest yet. Jenny then said "or me" and Nore pulled her cheek saying she always will love her.

Jenny was along with her mother on the science fair andwere about to watch the preformance of Bubbles and the other dancers. Jenny already had her camera out to film it, when suddenly GIR jumped on her mother's head and then onto the stage. Jenny, angry, tried to get rid of him. But GIR put a device on her head that took control of her and turned her into a portal that opened between the Cluster Zone and Megaville. This allowed the Cluster to invade the Earth. Jenny was seen struggling to fight back to gain control of herself again, but Nool was able to reprogram Jenny, making sure she doesn't break free. Jenny was later seen in a photo with her mother while the explosion happened.

The Grim Tales From Down BelowEdit

She is one of the fallen heroes,who died in the Battle of Megaville, so Professor Wakeman made a newer version and of course called it XJ-10.

Jenny is the main protagonist and the "15/16-year-old robot" to which the title refers, a state-of-the-art gynoid automaton created by Dr. Noreen Wakeman five years prior to the series, though she was designed as a 16-year-old girl. Though XJ-9 was designed to be Earth's protector, armed to the teeth with a wide range of weapons, devices, and transformations, she desires to live the life of a normal teenager and often makes this desire quite apparent to her friends and creator.

Jenny looking at the viewer

Jenny and Bubbles taking a selfie

Jenny has spare pairs of batteries

A small poster of Bleedman Jenny 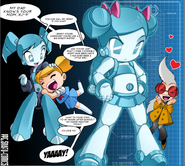 Bubbles finally meets Jenny
Add a photo to this gallery

Jenny is a female robot. She has a silver colored body with a blue top and blue skirt. She has also blue hair with two jet pigtails. She also sometimes wears a black skirt with a black jacket that has blue flame prints on them. In the character art she is red colored with orange flames similar to an episode of My Life As A Teenage Robot.

Jenny, being a robot, is capable of summoning a large arsenel of weaponry. She can shoot a average large laser from her chest as shown during the battle with the Rowdyruff Boys. She also is shown to summon regular day machines like a digital photocamera, when she took a picture of her and Bubbles, and a digital camera, when filming the dancers. She hasn't shown any of her build in arsenal yet.

Retrieved from "https://doujinpedia.fandom.com/wiki/Jenny_Wakeman?oldid=6710"
Community content is available under CC-BY-SA unless otherwise noted.