Susan "Mandark" Astronomonov is one of the main characters from the first few chapters of Powerpuff Girls Doujinshi. He is killed when he tried to commit suicide and was meant to take Dexter with him but he escaped. He is originated from Dexter's Laboratory.

Mandark had a long rivalery with Dexter. Once he broke in his lab along with his Jackbot and started to destroy it. One of his Jackbots aimed to Dexter but Dee Dee saw it and jumped in front of it and was fatally wounded, after which he retreated. Dee Dee then died shortly after he did so. After the tragedy, Mandark was in a deep depression until Bell came to him to say to come with her for a better life. For Bell, Mandark became her own big brother. Mandark had to prove himself to Dr. X and to do that he had to do one more thing destroy his archrival Dexter. Mandark captured Blossom with the help of Bell and the Clusters. When Dexter came into his lab they began to fight. After the fight Dexter freed Blossom. Dexter blamed him of the death of Dee Dee and that he doesn't know what it's like to lose a sister. Mandark told Dexter about his sister Olga. He became mad and thought Dexter wanted to kill Olga and summoned a giant Cluster to fight Dexter. The Cluster grabbed Dexter who became unconsious. Buttercup then came in and destroyed the Cluster and freed Dexter. Mandark then only had one option he commited suicide but took the rest with him. He activated several bombs that began to count down. Suddenly the Megas came in to save them and Dexter and the girls were saved and left Mandark to his fate. Mandark's lab then exploded, killing him.

Mandark is the antoganist from the Cartoon Network series Dexter's Laboratory. He is the archrival of Dexter and also an evil genius. He often tries to destroy Dexter's lab but mostly fails. He also has a big crush on Dee Dee, to her disliking.

Mandark's appearance is a lot different than his appearance from the series. Instead of his school clothes he wears a battle outfit. The outfit is black with some purple thins attatched to it. He made giant robot hands for combat. He has black hair with two cuts at the end that make up the letter M and wears glasses.

Though he did appear in his normal clothing from Dexter's Laboratory which is a white blouse with a brown striped tie, blue shorts and brown shoes with long black socks.

Mandark fights in a similar way as Dexter by using his machines for his battles. When he fights hand-on-hand combat, just like Dexter, fights with giant gauntlets, also on his feet. He is shown to summon a metal rope, katana, spike cudgel, wolverine claws, axe, feather, pencil 2, corkscrew, fork, pocket knife and sink out of it. He also was boxing, fencing and lightsaber fighting aganst Dexter. 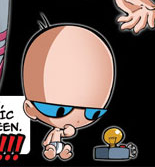 Oh it's a cute EVIL BABY!

Labcoat
Add a photo to this gallery
Retrieved from "https://doujinpedia.fandom.com/wiki/Mandark_Astronomonov?oldid=6201"
Community content is available under CC-BY-SA unless otherwise noted.