Michelene Mazinsky is a background character from Powerpuff Girls Doujinshi. She only appeared during the attack on Bubbles.

She only noticed and watched the fight of the Dread Dragon versus the Powerpuff Girls and Sensei Jack.

Manhattan-born Mike (short for Michelene) enjoys the features of the tropical island but, in return, misses the life that she had in New York and, as revealed in a particular instance, her school. Fortunately, Og is able to recreate many of the things that Mike misses most about the United States. 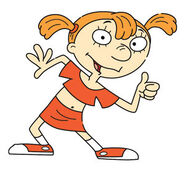 Add a photo to this gallery
Retrieved from "https://doujinpedia.fandom.com/wiki/Michelene_Mazinsky?oldid=6411"
Community content is available under CC-BY-SA unless otherwise noted.