My soul is yours, brother.' -Minimandy to Grim Jr.

Minimandy (a.k.a "Minnie") is a major character of Grim Tales From Down Below.

She first was seen with Grim Jr. down below and was picking flowers until a Demon attacked them but eventually got saved by Hellspawn . Grim Jr. said that Minnie once was different and began to tell the story.

Three days ago Minnie went along with her family to Halloween Town to celebrate Halloween. There she met her uncle Jack Skellington and danced with him on the party, while making Grim Jr. jealous.

While Grim Jr. was at Oogie's Manor Minnie was dancing on Curly Hill and discovered her Nergal Demon powers. Shortly after that Zero came to tell her Grim Jr. was captured and she went to save him.

There she defeated Oogie Boogie and his minions but Grim Jr. didn't liked that and got angry at her. He walked away but Oogie summoned the Pumpkinator that grabbed Minnie and got dismembered. At the brink of her death, she gave her right eye to Junior who then gained her Nergal Demon powers. After that her spirit was taken by Doctor Fate.

Later when in the Underworld Grim Jr. encountered Minnie in Jeff's cave. She acted really strange to Junior and Him told she was suffering from 7 Deadly Sins. She was now in the last phase "Lust". She wanted Grim Jr. to kiss her or else she would kill him, when he kissed her she turned back to normal and got really angry at Grim Jr. Then Him wanted to take Minnie with him but Doctor Fate released her and took her with him to Heaven.

There he noticed she still had feelings for his brother and sended her back to Halloween Town. There she saw Junior's spirit got eaten by the Demon Reaper and tried to save him but failed. When Dark Danny destroyed most of the Demon Reaper with his ghost beam the evil Grim Jr. was still alive but when Minnie huged him he got turned back to normal. Minnie's body was lying ripped apart on the ground. Dr. Finklestein did an experiment on her and turned her back body back to alive but now with the appearance of a ragdoll similar to Sally.

Later at the castle she was playing Twister with Grim Jr. when suddenly there was an intruder in the castle. Junior took her with him to the vault to fight. They saw it was Mimi and Grim Jr. wanted to solve it, but Mimi almost killed him when Minnie attacked her but ended up by being tied up beneath her brother. Grim then came to cut them loose and they went to the vault. There they saw Mimi got the Horror's Hand and saw her worst memory when she was in the ruins of Megaville. Afterwards, her mother, Mandy, removed Mimi's demonic side away, sealing it. Mimi is now fragile and feeble, and was about to be put away in the dungeon. Minnie saw her older half brother went in front of Mimi, protecting her from their mother's wrath. Junior was warned to move, but he didn't. He recieved a beating from Mandy, causing Minnie to worry. Junior transformed into his demonic nergal form. Mandy commented that he had guts, considering prevously to be as cowardly as his father. She told and warns Junior to keep Mimi as a pet and musn't find her in the vault again. Or she'll rip Mimi's head off.

Junior carried Mimi away, causing a sinister disapproval from Minnie. Minnie then stared at the Mandy Doll that wanted to play with her, but ended up slaying it and the Happy Huggy Stuffy Bear with scythe 2.0 causing the Devil Essence to become active.

She was later seen in her bedroom laying on the floor listening to music about love. When she got up and looked into her mirror it suddenly cracked and she was still very furious once it did.

Note: This character isn't conformed yet, so it isn't considered canon! And it's most likely not going to be released either, since Afterbirth was a submission!

A couple of years later during Afterbirth Minnie hasn't grown or changed since her younger self although she did aged. This is because she is trapped in the body the body created for her. After she taught Grim Jr. everything about the Nergal powers he suddenly left which made Minnie sad and angry. She then was "kidnapped" by the Boogeyman and was taken to his castle. There she eventually figured out she was better of there and proposed to Boogeyman. Eventually Grim Jr. came to save her but she didn't wanted to go back after how Grim Jr. treated her. After Junior pulled out his eye to trade it for his siblings Minnie realized that he did cared about her and grabbed the eye out of Boogey's hand and later she stabbed Boogey's eye out he got from Minnie. Minnie got both of her eyes back and became human again and together with her brother fought Boogeyman and defeated him. She then returned back with the others.

Nergal Demon Power- She can call up powerful weapons and has the ability to create a glowing and biological armor over her body. When she gave her eye to Junior, she has lost all of her demonic powers. However in Afterbirth she regained them, it is unknown if she will give her powers back to Junior. Although Jr's scthye had nergal powers impliying that Minnie enhacned Junior's scthye so he can still use the Nergal powers.

Power Transfer- When she transfer her powers to her brother Grim Jr thought giving him her eye, of course this ability may no longer work as the other eye may be more symbolic then giving actual powers.

Fencing- Her favorite sport. Minnie was taught fencing by Nergal Jr. and is very proficient.

Archery- Her favorite sport. Minnie was taught archery by Nergal Jr. and is very proficient.

Minnie has black eyes, curly/ wild/ long blonde hair with bangs that are somewhat similar to Bubbles and Grim Jr's. She was first a mortal girl who either wears a black outfit with a model of the Grim Reaper's head in the middle or a green outfit with stripes, but after a grusome event, Minnie's corpses were ripped apart and her soul was forced to leave it. Eventually, Minnie's body was stitched back together and her soul returned. Minnie now has a dark palish skin tone resembling her aunt Sally's, she has stitches on her body and face, a hair style similar to young Mandy's included with the same headband, her bangs were rearranged to make a shoot with a pink bow to hold it in place, her right eye was given to Grim Jr. which leaves her with only one eye, a scary purple like outfit with a half daisy attached to a dark grey cape and Mary Jane shoes.

Minnie has a somewhat more aristocratic and majestic lifestyle, compared to her carefree brother, and always speaks in a very formal and poetic manner (she uses words common to the Middle Ages). She spends most of her time studying poetry, music, and dancing. Some of her favorite sports include archery and fencing. Unlike a pampered princess, Minnie isn't the spoiled type; in fact, she's very different from her mother, Mandy. In a way she is very kind and loving, especially to her brother, although HIM said she was suffering from the seven deadly sins and one them was lust for him.

Despite her kind and love nature, she can be like her mom when angered; especially when someone harms her brother.

In the comic pages like Re-Collecting and Keep Out of Reach of Minnie, Minnie was shown to be intimidating and violent like her mother in some cases. She even went far as slicing Mandy Doll and Happy Huggy Stuffy Bear in half using Scythe 2.0.

"By father's scythe, this is my brothers!"

"This bone.. Is mine brother in peril? Lead me to him with the haste of thought!"

'"Do not be rash, dear brother. As to reflect upon thy action in lieu of what is to come!" -To Grim Jr in "Hammerdown Protocall"

'"The pain will be brief, brother. Endure it." -To Grim Jr in "Scythe To Meet You"

'"The Heavens scream!" -Minnie in "Breaking, Down and Through"

'"Thou preoccupation with causing such fright doth perplex me, Loved One. I ask thou permission to be excused..."- To The Boogeyman 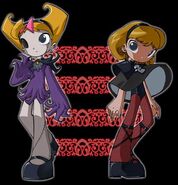 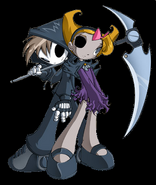 After Birth 2
Add a photo to this gallery
Retrieved from "https://doujinpedia.fandom.com/wiki/Minniemandy?oldid=4689"
Community content is available under CC-BY-SA unless otherwise noted.