Otto Osworth is a major character from Powerpuff Girls Doujinshi. He attends the Megaville Elementary School, and is a wizkid. His has a major appearance in chapter 4 but further becomes more of a minor character.

Otto first had a cameo appearance when he was one of the people who watched the fight between the Powerpuff Girls and the Dread Dragon. He cheered for Sensei Jack after he had saved Buttercup from the Dread Dragon's mouth.

After Blossom had seen the gynoid body (which she mistook for a corpse) of Dee Dee, of whom she didn't know who she was at the time, she went to Otto. She wanted to speak with Otto about Dexter. Later Blossom and Otto were outside, Blossom told him about her entering Dexter's secret laboratory. She asked who and what the person was that she saw. Otto explained it was an gynoid, an exact replica of Dexter's sister; Dee Dee. After hearing that Blossom wanted to know what happened to Dexter's sister, and Otto thought she deserved to know. Otto then said to Blossom to get ready to see the past. Blossom asked if he was a time traveler, and Otto agreed. Otto and Blossom teleported back into time (Dexter File 012) to show Blossom what happened. While Blossom watched how Dexter and Dee Dee were Otto explained that Dee Dee always was creating havoc in his lab, and Dexter considered Dee Dee the biggest obstacle in his scientific achievements. Just like a normal sibling rivalry. Otto also explained that Dee Dee sometimes took Dexter outside and teached him guidiance and enlightenment. They then saw Dexter fighting with Mandark Astronomonov and Otto told that Mandark was Dexter's archrival. He told that Dexter told about his lab, that he started using human organs to make Dee Dee's gynoid and almost killed Mandark.

The two returned inside and Buttercup saw that there was something wrong with Blossom. Buttercup wanted to punch Otto but Blossom said her to let it go and that she needed some alone time.

That evening Otto was at his home where Larry and Buck were having an argument about dinner again. Buck was teasing Otto with girlfriend things. He got a package and opened it. He saw that the package contained a letter from Mandark that said he had kidnapped Blossom. Otto showed it to Dexter who then told he was going to save her and that Otto was not to get Buttercup and Bubbles, as he wanted to save Blossom without them, as her abduction by Mandark was personal to him. While Coop, piloting Megas, was fighting Samantha, Buttercup entered the scene and beated Samantha. Otto also arrived being held by Bubbles. He sat next to Coop in the Megas and rescued the girls and Dexter inside of Mandark's Laboratory which was about to explode. In the aftermath he was sitting in the Powerpuff House along with Coop listening to what the girls had to say to Professor Utonium.

He was seen again in Chapter 7 where he made a cameo appearance when arriving at the school entrance, and one when he was one of the students attending Sensei Jack's Kendo class. He wasn't seen again until the end of Chapter 9. He apparently was one of the many persons at the science fair. During the invasion of the Clusters while in the safe room, Otto's watch had detected space-time tachyons which came from the detonated bomb, which is the one that Blossom and Buttercup had failed to diffuse. After going back in time after the bomb went off, he was about to tell only to Professor Utonium about maybe the reason why Time Squad exists, but he mainly stated that the explosion is only a stop-gap. He was also about to tell Utonium that the gap needs to be broken by something, but Otto vanished before he finished.

Otto is from the Cartoon Network series Time Squad. Otto is a very smart child from the present time and knows much about history. One day he meets Larry 3000 and Buck and illigally joins their time squad to clean up weird things in the past.

Otto wears a blue sweater with with a thick collar. He wears brown shorts and a black belt. He wears black glasses, his hair only concists out of a pluck of brown hair on his head. In addition to that he also wears his time travel watch around his wrist. In his school uniform Otto wears blue trousers with a black belt, he wears a white shirt, a black tie and a brown jacket.

Otto doesn't have any special powers like most of the characters. However Otto does possesses a time travel watch which he got from the Time Squad he is in. He can travel to any time in the past, and alter it. Aside from his time travel watch he also has an advanced intellect. However unlike Dexter and Blossom he specializes in history and not in science. 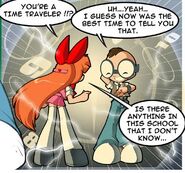 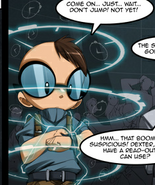 Cartoon
Add a photo to this gallery
Retrieved from "https://doujinpedia.fandom.com/wiki/Otto?oldid=6516"
Community content is available under CC-BY-SA unless otherwise noted.