Probotboy is a character of Powerpuff Girls Doujinshi. He appears in the side-story: The Forgotten and more recently in chapter 11. He originates from the Cartoon Network show, Robotboy.

Probotboy was along with Vexus in her ship when suddenly they saw Atomic Betty. Vexus ordered him and the Toybots to kill them. Protoboy rushed to Robot X-5 and ripped him apart but didn't manage to crush the head. When Betty was about to escape with the head he wanted to go after them, but was stopped by Vexus who told they probably would die soon.

Protoboy is violent and never talks. He always appears angry and unlike his Cartoon Network counterpart, he follows orders when given. He still however, lacks humanity and is not above using brute force or even killing.

Unlike his appearance in Robotboy his head is more circular than in Robotboy where it is square, further he remains the same. He has a white body with black cylinders on his head, a black bottom with a golden belt, black gloves and boots. He has red glowing eyes and there are glowing red lines going over his forehead.

Not many of his powers are shown yet because of his short appearance. He has great strength as displayed when he ripped apart the body of X-5. He is also capable of flight and is known to have several lasers and canons inside of him. He also has a Super Mode where he turns into a stronger version of himself, although he hasn't used that yet.

Protoboy was created by Dr. Moshimo in his earlier years. He had many of the same qualities as Robotboy, especially advanced fighting skills, but he lacked Robotboy's humanity. He was stolen by a young Dr. Kamikazi and Constantine. Kamikazi reprogrammed Protoboy's circuits and turned him evil, however, Kamikaze made Protoboy too evil and couldn't control him. 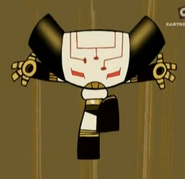 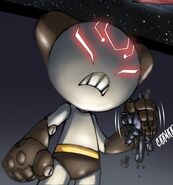 DIE! DIE! DIE!
Add a photo to this gallery
Retrieved from "https://doujinpedia.fandom.com/wiki/Protoboy?oldid=6507"
Community content is available under CC-BY-SA unless otherwise noted.