I. M. Weasel is a minor supporting character in the Powerpuff Girls Doujinshi. He is the assistant of Dr. Brisbaine.

Weasel appeared during the battle of the Rowdyruff Boys and Jenny. He had to give a report the next morning to Dr. Brisbaine.

He later also appeared at the science fair but now with a whole different look. He appeared alongside his parter Dr. Ghastly. He was also one of the casualties of the attack on the science fair, but was saved by Courage, but later faced his dead along with Dr. Doofenshmirtz by the giant explosion.

I.M. Weasel is the extremely gifted and talented protagonist of the series. He is a handsome young weasel who, although famous, is not snobby or stuck-up and is rather generous (for in one episode he donated his kidney to a sickly little boy in a kidney transplant) and is the distinguished celebrity who everyone admires. He is highly intelligent and has many skills (both social and practical), and is proficient in most known professions. Though Weasel was never a bully to him, the fellow main character I.R. Baboon (see I.R. Baboon below) is always trying to top the admired Weasel because he wants an equal or better share in admiration, though unlike his rival, Baboon is extremely idiotic and the target for ridicule because of his bright red buttocks, but Weasel tries to generously help out his friend. Weasel is often assisted by a beautiful woman named Loulabelle who likes to dress as a nurse.

He is a weasel with red fur, in his first design his head was much smaller than later where his head is longer and more square. The area around his mouth was also blonde fur and later red tufts were added on his cheeks. He still has a blonde belly but doesn't wear the ankle bands anymore. He does wear a professor coat with a black blouse and tie and in addition to that also wears small glasses. 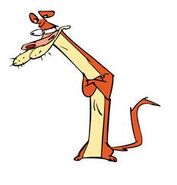 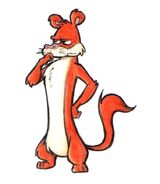 FanArt 2
Add a photo to this gallery
Retrieved from "https://doujinpedia.fandom.com/wiki/Weasel?oldid=6054"
Community content is available under CC-BY-SA unless otherwise noted.